You-A-Saurus: A museum experience prototype from Austin Toombs on Vimeo.

This final project for my User Experience Design class (Spring 2011) was to design, prototype, and test a museum exhibit. The above video is the final product of that project. My team mates and I created a museum exhibit that would teach children ages 6 to 8 about dinosaurs in an engaging way. We made use of role play and embodied interactions, inspired by the Microsoft Kinect, to enable children to BE the dinosaur in this exhibit.

Based on our research of elementary school curricula, the exhibit was divided into sections that teach children about the physical characteristics of dinosaurs, their dietary habits, their relative size, and how they walk. The image below on left depicts the experience of our museum exhibit from a child’s point of view. The image below on right is a layout of and storyboard for our museum exhibit. 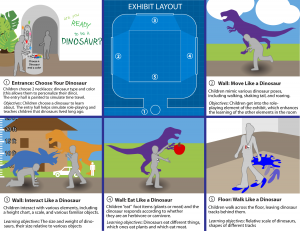 We created 2 sets of prototypes, each set including a prototype for each of the sections of our museum. We used Wizard of Oz style paper prototypes, PowerPoint prototypes, and prototyped games created with GameSalad.